Why It Was Time To Move Away From WeWork

Towards the end of last year, we made one of the hardest and biggest decisions we have had to make in regards to the business. We left our office space at WeWork and moved into a 2 year leased office. It wasn’t an easy decision to make. We had been at WeWork for 3 years and had doubled our staff each of those years. Yet the decision made began to feel like a necessity.

The reasons why we moved were numerous and in the end, they won out over what we felt we were losing – which was also a pretty long list. If you’re thinking about moving away from your WeWork or you are looking at starting out with your first office we would love to hear about your experience.

We all know that WeWork is expensive when it comes to per square meter office size. Initially, the price is outweighed by all the amazing perks and flexibility. However, WeWork isn’t built for businesses that have ‘stuff’. They are built for businesses that need a desk and a MacBook because that is pretty much all the space you are given per person. We worked out that our new office space, which is also not the cheapest, is three times the size and a 20% saving on what we were paying at WeWork. Yes – you read that right. THREE times the size. 20% cheaper. How could we argue with that?

As I mentioned, we have ‘stuff’ (If only decluttering could have helped!). Between client samples, fabrics, layouts, leftover fabrics, paint pots testers and everything in between, we did need more than a pedestal of space for each member of staff.

What we have in our new office has meant we initially have space for 5 desks, a breakout area, a kitchen area and a chill out area. We can also increase our desk count to 6 without a huge amount of effort.

WeWork offices are bland, while our new office is fun, funky and brand new. The entrance is really cool and definitely makes an impression on clients and suppliers alike.

It was time to make our internal brand visible to clients upon first visit and every visit after. As the residential side of our business is extremely generalist and each project completely different, we found that some consistency was necessary. We are happy that we can now show off a little bit of our internal branding.

5. Ability to grow in the future without the extra cost

That lovely green desk shown in the plan above is currently empty. We hope that it will be filled with an intern and then another permanent member of staff. We can also turn the desk and add another without office costs going up at all. Previously, a new member of staff would mean us moving to a larger office within WeWork. This would have meant a large increase in our rent, not just on our salaries. For a growing business, this can be very difficult to accept. We decided not to.

This is a big one. It is noisy at WeWork. Glass dividers instead of walls allow light in but amplifies every little noise. It could at times feel like the person in the next office was having their phone conversation or meeting inside your skull.

At WeWork, the meeting rooms were full so often. This was especially true at the beginning of the month when people had new credits, or at the end of the

month when they had leftover credits to use up. This rush to use credits meant that we weren’t able to be as flexible as one might imagine. If you were holding a smaller meeting, you could use the booths rather than a proper meeting room. However, people would hog the booths. This meant holding that meeting in the kitchen – with all that noise.

It was often a drag to try and get into one of the phone booths. They were always full and so you leave the office to find an open phone booth several times before you were successful. This brings us on to the next point…

9. No signal for phones The size of our old office. Not seen: space for four people

Oh god. I know this isn’t the same in every building but we were on the 9th floor of the Spitalfields building and you couldn’t get a signal in the office. Ever. It meant the phone booths being full was even more frustrating when you needed to get hold of a supplier. You literally had no other option.

This sounds like a lot that was wrong with WeWork, but our time there most certainly wasn’t all bad. We were with WeWork for 3 years. We had grown and developed as a business in part thanks to how easy WeWork made it to have an office. We all loved it there and were so sad to move away. Leaving felt like the end of an era and there are quite a few things that we had to come to terms with losing.

This is probably the biggest loss for us. It was great having a community team who felt like they were really championing your cause, cheerleading for you from the front desk and other offices. To be able to chat with different people at the weekly after-work drinks was great. Having other WeWork members as well as staff around who seem genuinely interested in what you’re up to is a major plus. And there was always the possibility that they could introduce you to other people who could help move your business forward.

This was also a great part of having a reception desk that was engaged and motivated. These staff members created a varied and interesting calendar of community events. If you weren’t interested in drinking you could join the running club, or pop down to listen to a speaker tell you how to get your first book published – all for free.

WeWork knows how to throw a party. Where we are now – really do not. They also aren’t exactly community people. They aren’t great at mixing and putting people together, so it hasn’t happened. If you are the host, you have to be the one to push the party in the way you want. It doesn’t just happen by magic.

That social aspect of being able to make friends, or at least acquaintances, outside of your company it doesn’t exist where we are now. It just isn’t fostered by the workgroup.

This isn’t just about free stuff (which was lovely). It was the fact you could check the member network for discounts, you could get a cheaper gym membership, there were talks on, things to do, people coming in. It felt like there was always something on that you could enjoy or learn from. Yes, it was noisy, but when you went down to the reception or through to the kitchen there was a sense of life. People were always doing things and getting on with it. It was inspiring to see other people also doing what they love. (WeWork’s motto, being put to use!)

When you look at moving into a new office, you can often be put off by the sheer amount of things you will now be responsible for.

Printing, Business Rates, phones, cleaning, washing up, stocking tea and coffee. The list is a massive. It can be a big undertaking especially if you are a small business and don’t already have an office manager.

Different kinds of breakout areas can be so useful. Although we do have a few breakout areas in the new building they don’t feel nearly as communal. Again, it probably comes down to the lack of community that can make you feel comfortable in a new space. Although the meeting rooms were done on a credit basis they were useful to have. Where we are now it’s a minimum of £35 an hour for a meeting room. The charge makes you think twice about whether you need that meeting, trust me, but at least it means when you do have them they aren’t a waste of time. Instead they are wholly productive.

We all know that it’s nice to feel valued. Part of that can be that your workspace offers you not only freebies but the chance to see something new. Popups in the WeWork building were great for this. We saw tons of new products, taste-tested tons of things, and I even won my height in beer (yeah, that was a good day!) My beer and I, many hairstyles ago

So, we are losing all of these things, but we made sure that the new transition would go well. We have worked hard and have been very diligent about keeping communication open over things that are and aren’t working for us.

How we countered the loss

and in 2019 we will be starting ‘lunch club’ where people can opt-in to make 1 lunch every two weeks for the team. That way almost half the week we won’t have to bring something in or buy lunch!

We’re still putting the finishing touches on our new office, so no pictures of it just yet. I know after all of this you must be chewing at the bit to see how we’ve styled our new space (that list of how we countered the loss? That’s only the half of it). Keep an eye out for a post in the future detailing how we’ve designed the new Kia Designs headquarters! 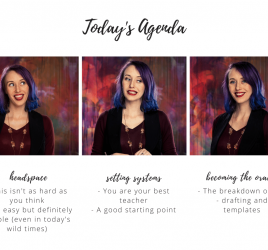 Webinar - Getting Your Systems in Place, Stepping Back & Stepping Up Your Game 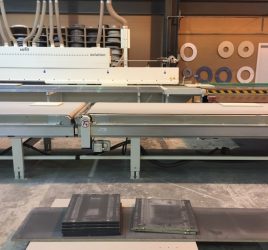 To Belfast and Back for Just The Right Kitchen 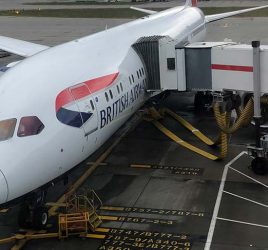 Is it worth travelling around the world for good design?